A night of Rock, Funk & Fusion ! 3 of B.O.P's top original bands team up for a night of super exciting Rock-Fusion, which promises to be fresh, original and 'in your face' !

ELECTRIC UNIVERSE
Power, passion, diversity and experience is what each member brings with them and this defines the band’s trademark sound, which deftly weaves from classic hard edged rock to pop and funk rock, delivering everything from soul infused power ballad soundscapes to driving upbeat energetic rock gems which kick the dance floor into overdrive whenever they take the stage - a veritable tour de force of songwriting and production, this is one New Zealand bands not to miss ! 2019 proved to be a successful year for the Tauranga based rock band with the release of their self titled debut album, 5 music videos and a number of shows spanning from Tauranga to Hamilton to Ohura to Bulls. The group is committed to bringing their dynamic live rock show to all the people of New Zealand.

THUNDERCHILD
Hard drivin' Rock n roll from Tauranga, in the tradition of GnR, The Cult and The Darkness. Armed with their own unique flavour of raunchy rock n roll, these guys have inevitably built up a strong following locally and a great reputation as a cool, energetic live band. They've played alongside some of the best hard rock bands in the North Island including Leathur Tattoo, Aura of Chaos, HardThrob, Antebellum, & opened for International bands, Small Town Artillery & Wooden Horsemen.
Thunderchild lead the way for this classic style of hard rock in the Bay. A band definitely worth experiencing live !

TRYPTOFUNK
A local Funk/Rap/Rock/Fusion group that has opened for the Official Red Hot Chilli Peppers Tribute band from Auckland. And bringing home their own flavour of funk-fusion with highly contagious hooks & bass grooves. With bass player Kingsley Smith, who was a member of Knightshade and a long time veteran of the NZ music scene; combined with the extraordinary talent of local rapper/poet, Dhaivat Mehta, who fronts the duo on stage with his charisma & swagger. These guys have already released 4 studio albums and an EP, so they have plenty of material to draw from on the night. They are the perfect mix of Chilli peppers style funk, Gangsta lyrical rap, musical fusion, and anti-establishment attitude... a unique live experience ! 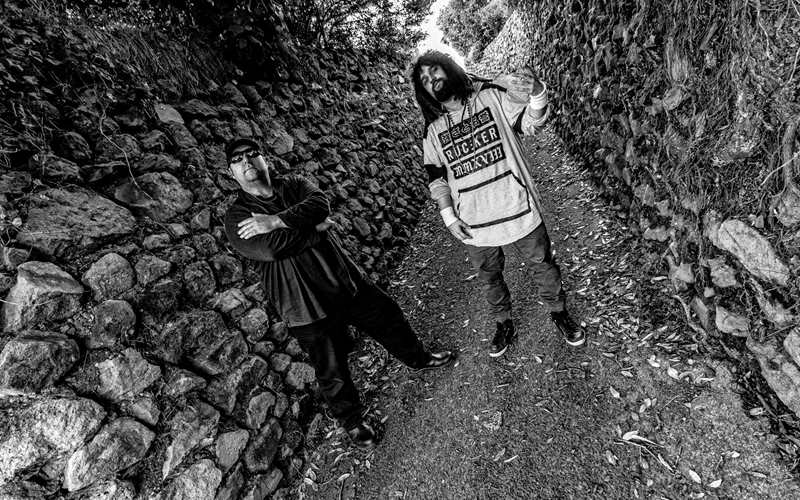