Rozella is super-excited to bring you our last show of the year. A truly spectacular extravaganza of performances sure to set everyone's lips on fire....Dont miss out! Rozella Presents & Totara St bring you another all-original showcase of established and emerging artists. Featuring, Labretta Suede & The Motel 6, Molly Gun, Grown Downz and special guest AlleyKat.

Headlining the night are Labretta Suede & The Motel 6 a bunch of crazed rockers, with a cult following in the US, and a fervour to entertain. Fronted by bad girl tease, Labretta Suede, expect an', high kickin’, low down rockin’ an-a-reelin’, high-class act and outfits you could just lick.

Formed in 2005 in Auckland, they took themselves to New York City, which is the spiritual home to this style of music mayhem. Rozella first found out about them after hearing about their ass whippin raving performance at the 2020 Splore festival. They really are a fantasic band!

Molly Gun is local and is an eclectic blend of vintage tones including fifties rockabilly, swamp blues and surf rock. Last seen on stage circa 2017 they are reuniting especially for this final Red Lounge Session of 2020!

Rozella first met Molly Gun's front woman Shannon Avery performing Totara Street many years ago, belting out her unique voice she had such fierce stage presence, it was magnificent to watch.

Grown Downz, Welsh born, Tauranga raised two pack Joel and Ellie are the guitar katana wielding, drum abusing self confessed Punk & Roll duo. They spewed themselves into existence at the end of the year 2017, Rozella first heard them play last year in the middle of the day at an underground gig. It was cool, raw and grungy set against the backdrop of concrete and graffiti under the Tauranga harbour bridge.

Special guest AlleyKat will kick off and light up the dance floor with his eclectic vibe. AlleyKat loves to mix up the genres. Touring NZ bands to Australia, running record label AlleyKat Records and regular DJ sets across Melbourne venues set Al’s course in the Music Industry.

AlleyKat is one cool Kat, a bit of an entrepreneur you could say, with fingers in many pies. Not only was he the business partner of Rozella and one of the key organisers and Producer of the Sundaise Music Festival he also started Sunsonics, a solar powered sound system business running festival stages off-grid. 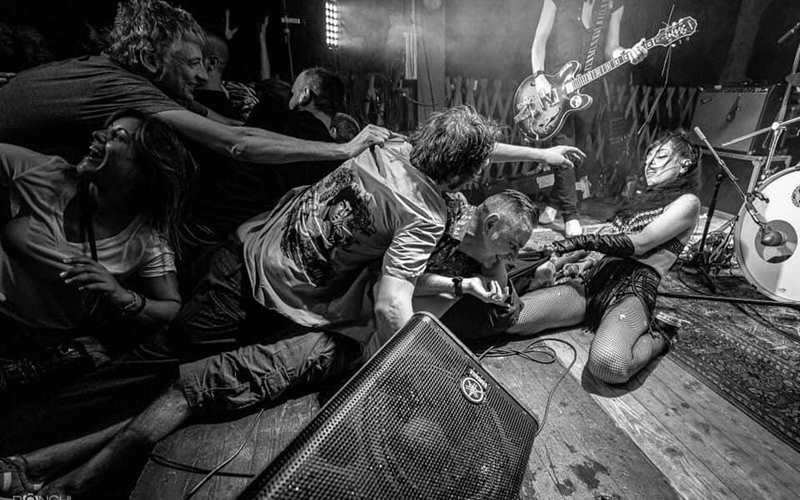